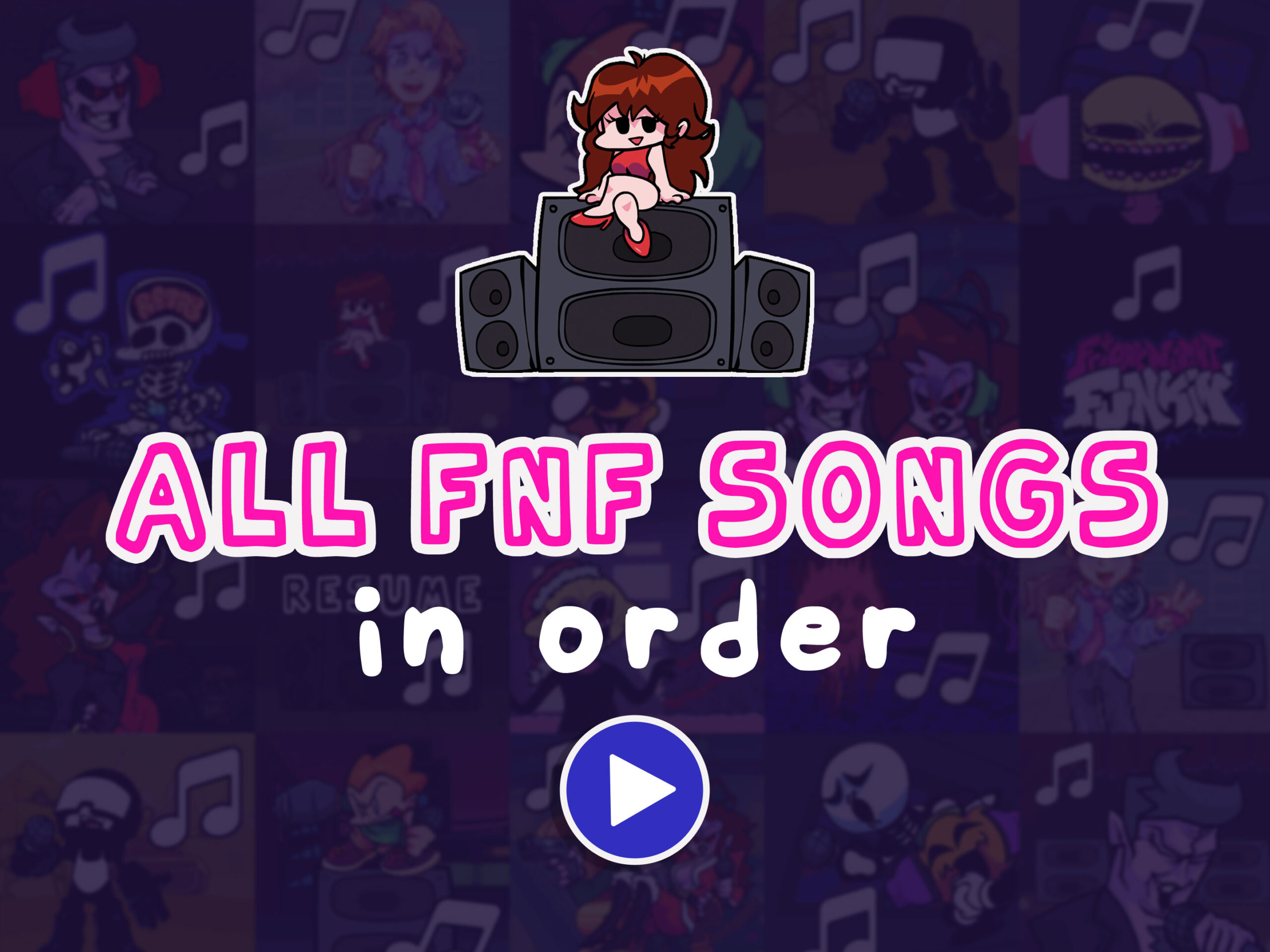 Yeah! 🙌 Here you can find all Friday Night Funkin songs in order. 🎶 Which are so good to gettin’ freaky! 🤪

Listen to your favorite FNF music, to the sounds of which Boyfriend passed enemy after enemy in a song battle. To be with his beloved Girlfriend. 💕

It all started with the 🧛‍♂️ Daddy’s ban, who decided to deal with Boyfriend once and for all. But after defeating Daddy Dearest, all the madness did not end. ⚔️🎤 New enemies were waiting for Boyfriend with new sick songs…

These awesome songs are composed and produced by Isaac Garcia aka Kawai Sprite. All rights reserved by Kawai Sprite. Monster and Winter Horrorland game songs were contributed by Bassetfilms.

By the way, did you know that you can customize your phone with FNF aesthetics!? 🤙📲
Check out our free Friday Night Funkin’ App Icons Here! 🎤

And so you started the Friday Night Funkin' game. What songs will you listen to most often, of course, the music from the Main Menu of the game. We have 3 tracks here. Noice fnf title track ``Gettin' Freaky``. Relaxing pause song with a funny title ``Breakfast``. And the melody, which with pain in your fingers and on heart you will hear more often than others, the song ``Game Over``, it remains to start anew!

All players who have started the game are greeted by the opening fnf song “Gettin’ Freaky”, which begins your journey with Boyfriend and his Girlfriend.

If you decide to take a break, or just go out for a drink of water by pressing the pause button, the relaxing fnf song “Breakfast” will play. Enjoy and take a break from the grueling rap battle.

The most hated music in the game is the fnf song Game Over, because you lost to your opponent in a rap battle, what could be worse? One more loss!

The Tutorial is the first track in the game levels to help beginners learn the basics. All players who want to test themselves in the game are advised to initially go through this first song. Because of this, it is uniquely placed in a separate section, separate from the standard weeks. Light and smooth melodies of fnf songs from the Girlfriend will make it easy to get used to the game and even relax.

Track Tutorial, known to all recruits who want to try themselves in this game. It is to this track were born the legends of the Friday Night Funkin’ game, who began as you did.

Daddy Dearest is the first person to meet Boyfriend in real rap battle. Worried about her daughter, he decides to deal with her Boyfriend. Whether our hero is worthy of the Girl's heart? It will be clear under the three rhythmic tracks impolitely imposed by Daddy. Although Boyfriend will win this battle, Dear Dad will keep a close eye on the couple in love.

On his first fnf track, Daddy Dearest quite relaxed decided to test Boyfriend in a rap battle. He underestimated this guy’s skill.

The second song Daddy Dearest is already more rhythmic and faster. After all, Daddy is angry! Coz he doesn’t get something to oppose Boyfriend in their rap battle.

In his third fnf song, Daddy decided to show all his skill and speed. After all, the prospect of letting his daughter go with this young impudent person did not impress him. Although this is far from all the trump cards from the Daddy.

At the height of Halloween night, terrible guests come to Boyfriend and Girlfriend's house. They will have to face the next opponents of Skid and Pump and unexpectedly with the Monster. The Boyfriend had no choice, because the life of a GF was at stake! To the creepy fnf songs, he gave all his strength to win, and for good reason. They survived this week, but what's next for them?

The first fnf track of Week 2 introduces you to the atmosphere of fear and danger – after all, it’s Halloween night outside. Skid and Pump managed to fully capture this terrifying vibe in the confrontation with Boyfriend.

The second song from Skid and Pump is just as dark. With that sound, the guys gave Boyfriend a good thrashing in this round.

In the third round, the sinister Monster decides to join the battle himself. His music scares even the most courageous players. But if Boyfriend is not a coward, he will be able to defeat the Monster and protect his Girlfriend.

Week 3 was marked by Pico's attack on Boyfriend. Daddy Dearest still decided to end Boyfriend once and for all by hiring Pico to kill him. When they met on the roof of an office building, they recognized each other, and instead of shooting at BF, Pico chooses a rap battle accompanied by lit songs with juicy bass and modern beats.

The first fnf song of Boyfriend and Pico was a warm-up, they just got to know each other in battle, but it didn’t stop them from giving off an epic atmosphere.

In the second track the rap game between the guys gets even more interesting, each of the friends wants to prove himself, using his best tricks. The passing subway in the back adds to the street vibe.

Pico’s third track brings us to the final end of this battle of friends. Pico held his own perfectly, but Boyfriend can’t be beaten. Pico lets our friend go without taking Daddy Dearest’s instructions.

On the move, on top of the limousines - Boyfriend's next rap battle with Mommy Mearest. Mommy's demonic minions are dancing around their battle, it all looks creepy... The only thing that saves this situation is the beautiful songs from Mommy, with great harmony of rhythm and performance. BF wins this fight, and as a victory he is ``accepted into the family``.

With the first track, Mommy Mearest wants to prove what a strong opponent she is, but Boyfriend is not impressed and continues to easily confront Mommy Mearest.

In the second fnf song of Week 4, Mommy Mearest gets angry, surrounded by her minions, which looks deadly for Boyfriend.

The third Mommy’s song is very rhythmic, which corresponds to the atmosphere of the rap battle that takes place on the roof of the limousines. This is Boyfriend’s winning track over Mommy Mearest.

A mall with a big decorated Christmas tree, Santa standing next to Dear Daddy with Mommy Mearest on his lap. It all looks pretty awful, as the two fnf songs ``Cocoa`` and ``Eggnog`` remind us. Boyfriend has no easy task, keeping not only himself but also Santa alive. On the final track ``Winter Horrorland``, the backdrop gets scary and Monster appears a second time. Lemonhead sings a horrible song, revealing his bloody plans once again. The BF has to save the day again to avoid being eaten.

In the second track of the fifth week, Boyfriend does his best in a rap battle to save Santa, and things get tense.

In the last song of the Red Snow level, Monster appears and starts threatening Boyfriend and Girlfriend. In the track you can hear the calculated and horrible words addressed to our heroes.

Senpai, Boyfriend's next opponent. The whole school is in love with this charming guy, as evidenced by his two fnf songs ``Senpai`` and ``Roses,`` to which the girls watch him with hearts in their eyes. These tracks sound in 32-bit style, and so does the picture, which reminds of it. On the final third track, ``Thorns``, the scene changes dramatically and the Spirit, who has been imprisoned in the poor guy's body, appears. What's going to happen next?!

The first Senpai song is in an unusual style, you can hear notes that refer to old games. During the rap battle the sakura petals fall down.

The second song of Week 6 is also in the style of retro game music. The girls in love on the background send us back to the vibes of the dating sims.

The last song of the Hating Simulator level completely changes the atmosphere of the game to an ominous one. Coz instead of Senpai, a red Spirit appears, which Daddy Dearest has imprisoned in this game.

When Boyfriend and Girlfriend go on vacation, their plane begins to suddenly crash into the desert. Upon regaining consciousness, they find themselves held captive by Tankman. It was all a conspiracy between Tankman and Dear Daddy and Mommy Mearest to kill BF. But instead of killing him, Tankman decides to challenge Boyfriend in a rap battle. The first two fnf songs ``Ugh' and ``Guns`` amidst the military devastation prove grueling for Boyfriend. Still, he wins. On the third track, ``Stress``, the situation becomes critical. Tankman orders his henchmen to kill our heroes. But in the meantime, Pico heroically appears to help save Boyfriend and Girlfriend.

The first track of the last week sounds rhythmic, Tankman song makes you feel the danger in the air, because he clearly has bad intentions.

During the second Tankman song, he becomes even angrier and more dangerous. Keeping up with his speed in the battle is getting harder and harder. The BF worries about his Girlfriend’s safety.

The last Tankman song is too much in the mood to kill the Boyfriend and Girlfriend, but ерун trusty friend Pico comes to the rescue! And right after the rap battle ends they manage to escape from angry Tankman.